I just moved back to Ann Arbor and started school, so the last several weeks have seen a large number of important stories pile up. Let's address some of them here:

The investments focus on improving specific power (power / weight) and efficiency of two key classes of electric components: motor/generators, and converters. The chart below very roughly illustrates how the pieces fit together to deliver power to the props/fans (via the motors). Disclaimer: I'm not an electrical engineer. If I'm wrong, tell me in the comment box. 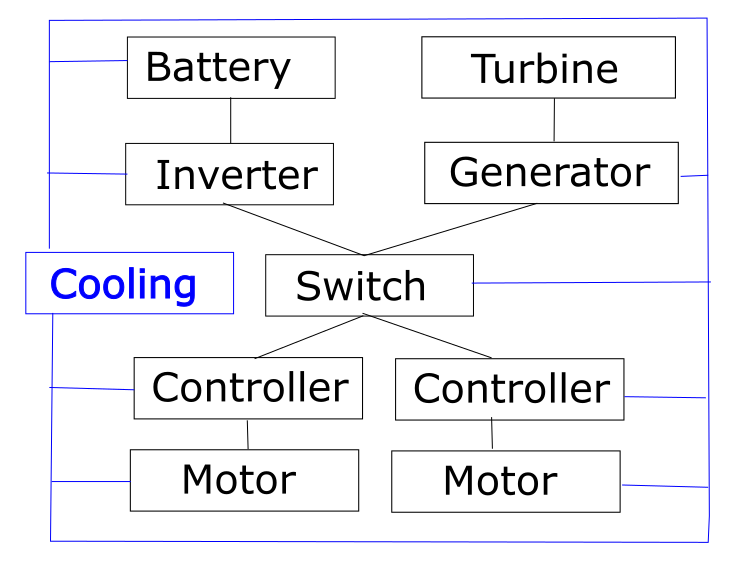 Schematic of a hybrid turboelectric concept

The Ohio State University, the University of Illinois, and NASA Glenn are independently developing motor/generators using different fundamental technologies. The Illinois team (which appears to be under Prof. Kiruba Haran, who is also a cofounder of Zunum) is working on permanent magnet motors, while the OSU and NASA Glenn team are working on lower-RPM technologies without permanent magnets. Permanent magnets are stronger but are more difficult to shut down or disconnect. The motors are in the 1MW power class, 13-16kW/kg specific power, and 93-98% efficient. No timeline was provided in the Aviation Week article; I'll have to do some more digging.

Likewise, another Illinois team, NASA, and Boeing are developing competing DC to AC conversion components (inverters) in the 200kW-1MW class, targeting specific power 19-26kW/kg and more than 99% efficiency. The NASA and Illinois concepts use competing advanced semiconductors and are liquid cooled, while the Boeing design uses off-the-shelf Si technology with cryogenic cooling.

NASA also discussed the general direction of its work in conductors and power distribution. The current work is focused on the low kV range, with conceptual work looking at voltages up to 10kV for the N+3 advanced concepts. At altitude, the thinner air makes electrical arcing much more of a problem than at sea level; advanced, lightweight insulators with good thermal properties may be a potential area of future work.

I will write more at a future date about NASA's programs as well as their electric testbed facility. It's also worth noting that, while the X-57 program is moving along, none of NASA's five other subsonic X-plane proposals are proposing electrification.

There are so many groups working on high-efficiency power electronics, batteries, and motors these days that it's difficult to keep them straight. I started a database to track key metrics for each component. I will use the data to eventually construct weight, power, efficiency, and cost estimating relationships for parametric modeling of these components in my optimization research.

FlightGlobal reports that GE has successfully demonstrated megawatt-class power generation on an F110 low-bypass turbofan by offtaking power (I'm guessing through bleed air) from the high and low pressure stages with 98% efficiency. This represents 2-3% of the total power of the engine; not a great solution for hybrid-electric propulsion but potentially very important for military platforms that demand ever more power to run their electronic warfare hardware. The team also electrically drove a propeller with power equivalent to a PT6 turboprop (one of the most common powerplants for 6-12 seat transports).

This story and the one above confirms that an industry consensus seems to be emerging around 1MW as the right power class for this first round of X-planes and demonstrators.

The August 3 edition of Aviation Week was all about "Urban Air Mobility" - in other words, Uber Elevate and electric VTOL. I won't regurgitate the great analysis here in the blog but if you have access behind the paywall, it's worth taking an hour to read through.

Notably, both use Halbach Array generators (originally developed by LaunchPoint technologies) for high specific power. I found this gratifying since my 2012 senior design project relied heavily on Halbach Array motors and there were no commercial applications yet at that time. It seems to be scaling well!

I saw a couple of articles demonstrating tangible progress for the A^3 (Airbus Silicon Valley) Vahana team. KUOW (Seattle NPR) interviewed one of the team members who claimed flight testing of the first prototype will begin sometime in November in sunny Pendleton, OR. I will be curious to see pictures of how complete the prototype is - an RC model, or a manned vehicle flown in unmanned mode.

A few other details came out, notably a detailed description of the LIDAR system planned for use in evaluating whether landing zones are clear of traffic or obstacles.